An introspective look back at 2020.

What a year. Days felt like weeks, weeks felt like months, and then—seemingly, out of nowhere—it’s December 2020. To say that this year has been anything but atypical would be an outright understatement. This year has shaken the whole planet. COVID has brought heartbreak, sadness, and stark new realities to all of us. And business as usual fell, shakily, to its knees. You’re going to read plenty of “2020 recap” articles over the next few days, and I appreciate the time spent on mine.

We’ve all learned so much this year, but I’ve found three very specific learnings that have had the most profound impact on who I am and how I lead. Learnings that will continue to define my approach as CEO for years to come.

1. I’ve learned the difference between “rational” and “right”

When it comes to running a business, rationality matters—it’s even given priority. But in moments of crisis, rationality isn’t always the correct choice, even when it makes absolutely zero “rational” sense. I’ve had to weigh “rational” vs “right” decisions all year long, and I’ve found the courage to do what is right for my team, more than what was rational.

Running a business is difficult—and at times I feel rationality justifies the decisions we have to make, and that doing so would make sleeping easier. But as a company whose mission is to bring humanity back to the workplace, reconciling between "rationale" and "right" has not always been easy. But, I'll tell you, I sleep better knowing what I did what was right for our people—regardless of if it made me look like a fool, because we've emerged stronger as a company and as a leadership team as a result.

Next year, I’m going to keep doing what’s right over what’s rational. Rational is safe, it’s by-the-book. But this year, the ‘book’ was lit on fire and tossed into a dumpster. Now that this dumpster fire of a year is in the rearview mirror, we have an opportunity to rewrite our story of how businesses should be run. About how people should be treated and what the history books will say about the time we took to make things right.

2. A crash course in inclusion and the importance of diversity

If I’m being honest—D&I was not a real and legitimate focus area for me or Softway until 2020. Up until this point, and as a result of my own behavioral transformation and Softway’s culture transformation, diversity and inclusion had been woven into the work we did without being something we paid too much attention to.

Not to say that building a diverse and inclusive workforce wasn’t important—very much the opposite—but the actual time and energy in the areas of inclusion and diversity was lacking. I was uneducated in the space. As someone from a diverse background, I’ve known about and experienced what a lack of inclusion feels like—but this year unlocked my resolve, confidence in, and responsibility for creating a purposefully inclusive and diverse workplace where people feel a sense of belonging. Now it’s become a key area of focus for Softway, our internal culture, and the products we offer.

I don’t think anyone can say, conclusively, that they’re ever fully inclusive—and i’ve only just begun my journey into truly practicing inclusion. But in these stress-filled months, I’ve learned that real inclusion—just like the practice of servant leadership—is an aspirational journey with no endpoint or finish line.

As I shift my focus towards 2021, I’m looking forward to refining my own self-awareness and ability to recognize situations where I’m contributing to a lack of inclusivity. I’m committed to understanding my behaviors, learning to help others in this space, and unpacking the complexity of D&I. In 2021 and beyond, I will practice, implement, learn from, experiment with, and live by inclusivity—not because it is an ideal, but because it is pragmatic, powerful, and the right thing to do.

3. Loneliness is a leadership myth that needs to be debunked

As a leader, you don’t have to be alone. You shouldn’t be alone. To do the work you need to do, you simply can’t go it alone. Over the course of 2020, this realization has come sharply into focus. That saying we often hear, “it’s lonely at the top,” it’s trash. More fodder for the dumpster. I’ve thrown it out of my vernacular because it’s simply not true. No leader can do their work without the support of their team.

The only reason why you’re a leader in the first place is that you have folks that follow you.  And if you aren’t empowering the people that follow your lead to support you, you will fail. I’ve begun to recognize that the people you surround yourself with are critical to your ability to lead. In other words: A leader isn’t self-made. The only way I’ve been able to make my way through this hellscape of a year is to more consciously include team members that will hold me accountable and be real with me. Brutally honest at times, even if it hurts—especially when it hurts.

In 2021 (and forevermore) I want to help leaders realize that without a team around them to support them, argue with them, hold their feet to the fire, and be willing to share personal triumphs and tragedy—they’re headed for a cliff. I want to put the burden of paving a path forward for leaders into the hands of people that support leaders. For those that consider themselves outside of leadership positions, you CAN influence and support your leaders and they need it, they desperately, desperately need your support.

2020, you sucked. But you’ve also unlocked resilience, courage, and a desire to do the right thing for more people. In less than a year, we’ve found our path forward as Softway, and I’ve found a more focused approach as a leader. We’ve invested in ourselves to create new tools, products, and solutions that will help bring humanity to the workplace. We’re stronger than ever. We’re more committed to inclusive and equitable workplaces. We’re more determined to do what’s right. 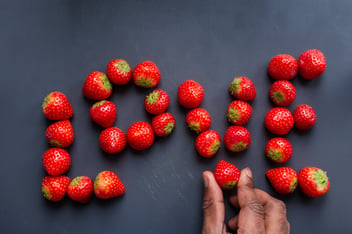 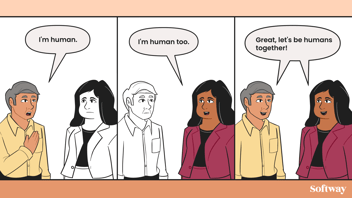 Working parents & caregivers, and the rise of the split-day workforce